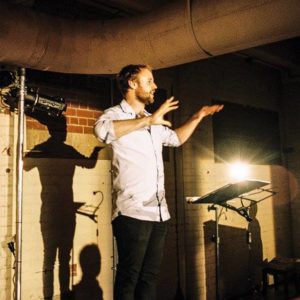 Elliott Hughes is a composer and trumpet player with a passion for creating innovative new music across contemporary classical, jazz and electroacoustic music styles. Based in Melbourne, he has composed more than fifty works for a remarkably diverse range of ensembles; from orchestras and chamber groups, to big bands and jazz trios, through to soloists with live electronics.

As a trumpet player, Elliott specialises in improvisation and performing with electronics, which led to his invention of the ‘Augmented Trumpet’; an instrument that uses the normal movement of the valves to control and synchronise the electronics with the acoustic sound. Described as “mesmerising – something out of the future”, these performances conjure diverse soundscapes that, sometimes inexplicably, all originate from the trumpet.

(Keep reading for the long version)

Born in Perth, Elliott began playing trumpet aged 11, and quickly developed a love for jazz and big band music. A pivotal moment in his development occurred when he joined the West Australian Youth Jazz Orchestra at age 15. He performed with WAYJO for six years, composed his first compositions for the group, and was awarded the Jack Bendat Scholarship. These experiences helped lead him to the West Australian Academy of Performing Arts, where he completed a Bachelor of Music (Jazz Composition and Arranging) in 2009, with a final recital mark of 97%.

In 2010, Elliott was accepted into the Australia Council for the Arts’ JUMP Mentorship program, through which he completed a national tour as a guest composer/conductor to six large jazz ensembles. Under the guidance of Mace Francis, Elliott organised each concert, composed new works, rehearsed, and conducted the groups. The Bennetts Lane Big Band, Mike Steward Big Band, ATM15 and Sydney Conservatorium of Music Big Band all participated in what was a very ambitious project for such a young musician. His composition, ‘Another New Beginnings Again’, written specifically for this tour, was also awarded the West Australian Music ‘Jazz Song of the Year’ award.

2011 saw a relocation for Elliott, enabling him to undertake an honours at the University of Melbourne, under the tutelage of Stuart Greenbaum. With his guidance, Elliott began exploring twentieth century art music, which led him to complete his first pieces for chamber groups, orchestra, and soloist with electronics.

The step into contemporary classical music opened up many different opportunities for Elliott, including participation in development programs such as:

In 2013, he was awarded the Dorian Le Gallienne Prize for Composition, and was commissioned by the Melbourne Recital Centre to compose a work for Syzygy Ensemble. This piece was first performed at the 2014 Metropolis New Music Festival. Elliott also premiered a notable work for large jazz ensemble during the 2014 Perth International Jazz Festival, demonstrating his ability to work across genres.

In 2014, Elliott returned to the University of Melbourne to pursue a Master of Music (Composition) degree under the supervision of Stuart Greenbaum and Brenton Broadstock. During this period, Elliott deepened his knowledge of the music of Australian composers, particularly Peter Sculthorpe and Anne Boyd. By endeavouring to understand what makes their music identifiably Australian, Elliott began assimilating those aesthetics into his own work. ‘Dry Submerged – Windswept Still’ (for trombone ensemble) and ‘Natural Light Below’ (for orchestra), are two examples of Elliott attempting to articulate vivid Australian landscapes through his developing hybrid aesthetic – described in his Masters folio as:

“…taking concepts from contemporary classical and contemporary jazz music, and applying them to a variety of ensembles both sides of the spectrum. My ambition is to create a distinct voice that is recognisable regardless of the instrumentation of any one piece, and to avoid drastically modifying my aesthetic due to the historical connotations of an ensemble.”

Whilst stepping into the contemporary classical world, Elliott continued to maintain his passion for big band music through two tours to the USA as a guest composer/conductor. Having met saxophonist and bandleader Brad Linde at the Banff Centre Workshop for Jazz and Creative Music, they together presented Elliott’s music in New York City, Washington DC, and Baltimore. Highlights of the tours included performing at the 2015 Washington DC Jazz Festival, and multiple performances at the prestigious Jazz Gallery in New York City. Ensembles for these tours included elite musicians Jon Irabagon, Ryan Keberle & Seneca Black, all of whom feature on records that inspired Elliott to start writing for the big band genre. The ensemble, co-led by Linde, has recorded a double album of Elliott’s compositions, which is due for release mid-2019. He will again tour to the USA to launch the recording, including a performance at the Washington DC Jazz Festival. As a bandleader, Elliott has also directed the Monash Jazz Orchestra for three years; a student ensemble run through the Monash University Philharmonic Society.

Complimentary to his concert music, Elliott has collaborated on numerous contemporary theatre productions. ‘The Crossing’, premiered during the 2016 Perth Fringe Festival, was received to high acclaim, with the music (for solo percussionist) specifically mentioned in reviews:

“Their fabulous score, performed to perfection, is the highlight of a show with many candidates for the honour” (David Zampatti, The West Australian).

Over the past seven years, electroacoustic music has become a growing part of Elliott’s work. After his mentor Lindsay Vickery (from WAAPA & Decibel ensemble) introduced the artform to him, Elliott has since composed numerous works incorporating live electronics, and often performs with trumpet and laptop. Two of his electroacoustic works have been performed in New York, including ‘Underdogs with Regrets’, written for Melbourne-based bass trombonist Benjamin Anderson. He also designed the electroacoustic soundscapes for ‘Blackbird in the Garden’, a multi-disciplinary work featuring dance, live musicians and electronics.

Elliott’s continued exposure and experimentation with electroacoustic music led him to design a new sensor that follows the movement of the trumpet valves. Described as his ‘Augmented Trumpet’, he now performs regularly with the instrument in improvisational settings, and more recently in notated works. The Augmented Trumpet was first developed while Elliott attended the Arts, Letters and Numbers workshop in New York, and further refined during two weeks as a resident at Testing Grounds in Melbourne. Having created the original prototype out of PVC pipe, gaffer tape and velcro, Elliott is now enhancing the Augmented Trumpet sensor so that it can be 3D printed, and adding an accelerometer to pick up physical movements of the trumpet bell. Ideally, it will be a more sturdy and transferable unit, allowing accessibility for similar-minded trumpeters to conduct their own experimentations.

In March 2018, Elliott released ‘space’; an EP of Augmented Trumpet music. It also featured music developed during a residency with the East Gippsland shire, through a grant from Creative Gippsland. These pieces combined trumpet sounds with field recordings of the local area, and were written specifically for installation in the Bairnsdale library forecourt. During this residency he also worked with the East Gippsland Brass Band on group improvisation, and presented the outcome in a ‘flash mob’ style performance in the Bairnsdale mall.

Elliott commissioned and performed five new works for Augmented Trumpet in August 2018, in a concert entitled ‘Augmented Trumpet – First Blood’.  The pieces were presented in quadrophonic sound and accompanied with live visuals developed by Elliott.

Since 2017, Elliott has been collaborating with Bianca Gannon, a pianist & composer with a passion for Indonesian Gamelan. Together they improvise and compose for the unique combination of trumpet, piano, gamelan instruments and electronics. In May 2018, hey presented a significant concert of this music at fortyfive downstairs, featuring five performers, four Indonesian gongs, three Indonesian mallet percussion instruments, double bass, piano, trumpet, voice, and electronics. Their music has been described as

Together they have already performed at MONA (Hobart), Tilde New Music Festival, Art Centre Melbourne, and Lebowskis concert series where they completed a six month ‘DevRes’ residency to grow their work.

Currently, Elliott is engaged in freelance composition, solo performance, large-scale collaborative works, and developing more music with Bianca Gannon. His next project is a collaboration with Allison Wright & Tilman Robinson, developing a 20 minute work for two Augmented Trumpets that will be presented at Dots & Loops’ “Liminality” festival in Melbourne and Brisbane.

Outside of music, Elliott enjoys playing tennis, bushwalking, and a large glass of red.