I’ve been quite fortunate of late in securing some regular work.  Aside from my conducting role with the Monash Jazz Orchestra, I’ve been tutoring orchestration at Melbourne University, and recently taken up a position at Maribyrnong Secondary College as an instrumental brass tutor.  I’ve really enjoyed teaching again, and also enjoyed being paid…$$$$$$ 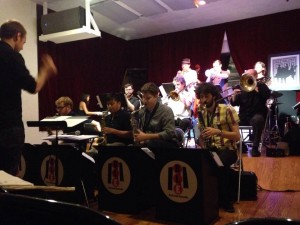 After attending the Atlantic Music Festival in Maine, I travelled south to Washington DC, where I met with saxophonist and excellent human Brad Linde.  There he let me attack his big band, the Bohemian Caverns Jazz Orchestra, with a set of my music.  It was a very special occasion, being the first time I had seen Brad since we met at the Banff Centre in 2013.  He also invited our fellow Banffers Erika Dohi (piano), Tara Kannangara (trumpet), Julian Anderson-Bowes (bass) and Jonathan Taylor (drums) to sit in with the band.

We then travelled to New York City, taking the Banffers with us, to perform the music under the guise of the Brad Linde Expanded Ensemble.  Making up the rest of the band were some of New Yorks finest musicians, each phenominal soloists in there own right and members of some internationally acclaimed bands led by stars Dave Douglas, Maria Schneider and Darcy James Argue.  Needless to say, it was terrifying.  We made it to the rehearsal barely with minutes to spare thanks to the New York traffic, picking up a bass on the way, and taping parts together in the car.  However once inside the venue, the famed Jazz Gallery, everything calmed down and the rehearsal ran very smoothly.  The concert itself was one of the best I’ve been part of, the musicians completely dedicated themselves to the music and performing with an amazing energy.

The next night, we travelled to Baltimore to play a final concert together.  This band was made up of musicians from the DC area alongside the Banffers.  While the audience was slightly disappointing, it was excellent fun and great to play and hang out with the musicians.

None of this would’ve happened with the energy of Brad Linde.  He managed to simultaneously be a saxophonist, band leader, taxi driver, hostel manager, and countless other roles, taking everything in his stride and somehow making it all work.  I can’t thank him enough and look forward to working alongside him again in 2015.

Below is an excerpt from the gig at the Jazz Gallery, performing a piano feature of mine called ‘Unprotected and Exposed’.

In July 2014, I attended the Atlantic Music Festival in the beautiful state of Maine, USA.  I was a participant in the composition program, working with chamber ensembles, the AMF orchestra, and the electroacoustic music faculty.  The range of musical styles, opinions and ideas was incredibly broad, with a rotating composition faculty of some of America’s leading composers.  These included:

Some highlights included electroacoustic music sessions with Mari Kimura (Juilliard School), Jean-Baptistse Barriere (IRCAM), and Tom Zicarelli (Berklee/Cycling 74); mostly about interactive electronics and how best to incorporate them into performance without hindering the musicians ability to concentrate on the music itself.

I was also very fortunate to meet and work with many great young musicians, including premiering and recording a new work entitled “Dust and a Strong Economy”.  The orchestra read through and workshopped “After Ivy”, and I began work on a solo cello piece.  A very productive, very rewarding, very thought-provoking month!

This project was supported by an Australia Council for the Arts development grant, something I am very grateful for!

Here is the recording from the festival, recorded my Vicente Alexim (clarinets) and Andy Miller (percussion).