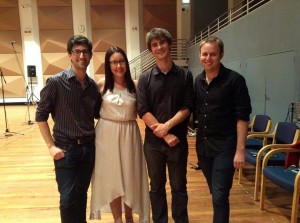 The four composers in the MSO Cybec Program – Andrew Aronowicz, Lisa Cheney, Kym Dillon, and myself

A couple of weeks ago I had a new piece premiered by the Melbourne Symphony Orchestra, as part of it’s annual Cybec 21st Century Emerging Composers Program.  This was definitely a huge learning curve for me and I can’t thank the MSO and the Cybec Foundation enough for giving me the chance to do this!

Now, after the excitement, nerves, stress and celebration has passed, feels like a good time to gather some thoughts and reflect on what was one of the longest and most involved projects I have done.

To start with, I was really proud of what I composed for the concert.  I think the piece, entitled And Then It Just Happens, had something worthwhile to say, took some risks, pushed my own boundaries, and had some really special moments.  But I also felt like this exposed some real flaws in my technique.  Mostly: balancing the ensemble and allowing room for each gesture to be heard, pacing the material well, and consistently using the orchestra to its full potential to make it sound it’s best.

I think comparing my piece to the three others in program, mine seemed the most raw – plenty of energy but just missing a bit of refinement and clarity.  The two pieces chosen to be performed again at the Metropolis Festival, Andrew Aronowicz’s Strange Alchemy and Lisa Cheney’s The Pool and The Star, seemed to get this balance spot on.  In short, I think the orchestra was made to sound it’s best by those two works.  And Kym Dillon’s Liber Creatorum, the fourth piece in the program, I think also got this balance a bit clearer than my own work – this piece especially grew on me each time I heard it during rehearsals.  To be honest, all the works were of such a high standard, we all had no idea which they would choose for the Metropolis concerts! Big congrats to Andrew, Kym and Lisa for composing such great works, and I’m already looking forward to hearing Andrew’s and Lisa’s pieces at Metropolis!

On that, I felt quite humbled to be included in this group of great emerging composers.  Although we only spent a couple of days together, it seemed like we had all shared similar experiences with this program, and more broadly being young Australian composers.  It was really refreshing and inspiring to be around you, albeit briefly, and I look forward to crossing paths again in the near future!

For me, I think I will revisit this score in a couple of months to see what were the most and least effective moments, and especially see how the piece is paced.  Definitely some detailed self-analysis would be useful, before I start a new orchestral piece later in 2014!

I think this program will be an important marker in my development.  Actually hearing my music performed by a world class orchestra has given me far more perspective than I have ever had before.   And now, I know I need to keep working hard, keep listening, learning, and keep writing, to be able to more effectively express whatever it may be that I’m trying to express through music.